Kassie has felt adrift ever since her dad died when she was in college. Now 24 and living in Seattle, she gets interested in learning sign language through her roommate, a sign language interpreter. One day at a Deaf community event, she sees a young man sitting off by himself. Kassie feels compelled to try signing to him–the fact that he’s strikingly handsome doesn’t hurt.

Jake has been deaf and blind since birth. His disability has cut him off from the world, but beneath his isolated exterior, is a smart, sweet guy with a dry sense of humor. Despite the odds, he’s highly educated, but at 26, he’s gotten stuck in a rut, with few friends and no clear career plans. Until a sweet-smelling girl introduces herself to him unexpectedly, and opens up a whole new world to him. END_OF_DOCUMENT_TOKEN_TO_BE_REPLACED

All the pleasure and none of the pain. That’s exactly what Jonah Colt and Cynthia Buckingham expect out of their new found relationship. Too bad life doesn’t operate that way. Only If You Dare, is my latest novella from The Wild Rose Press, Dearly Beloved series. 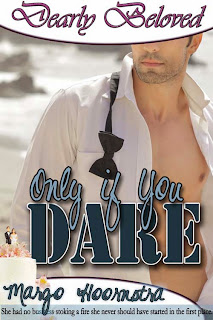 Only If You Dare is now available for Kindle

All the pleasures and none of the pain, that’s what Cynthia Buckingham wants in a relationship these days. A one-night stand with Jonah Colt seems to fit that bill perfectly. Newly divorced, she’s too busy planning her daughter’s wedding for any serious involvement. Besides, her true passion is helping victims of PTSD reclaim their lives.

Waking up after spending the night with a woman he barely knows, Jonah is stunned to realize sex for the sake of sex isn’t enough for him anymore. A veteran of more military battles than he cares to count, he wants to forget it all and focus on peaceful civilian life. Except flashbacks won’t allow it.

Falling for Cynthia makes Jonah regret his weakened state, but he’d rather hide the truth than face it. When she sets aside everything she believes in to help him heal, can he accept her help–and her love?

Joint heir to the largest construction company in the state of Ohio, master plumber, Toni (TJ) Jenkins has been groomed to behave in a way that is befitting of the respected Jenkins’ family name. But after she breaks up with the only man she’s ever loved, to protect a secret she holds close to her heart, poor decisions lead her down a path of destruction that risks ruining the reputation of the company her family has worked hard to build.

Cincinnati police officer, Craig Logan, knows Toni is the woman for him. They’ve been apart for months, but when they run into each other at a party, the passion between them sizzles stronger than ever. She says she can’t handle dating a cop, but he senses that something else keeps her from rushing back into his arms. Craig wants her to be his wife, and he’ll do whatever it takes to prove no matter what she’s hiding, she’s still the best woman for the job.

“Hey don’t get mad at us because you keep picking boneheads.” She waved a hand in Ronald’s direction. “It’s not like you can’t do better. You’re smart, have a good job, and you’re cute – but not as cute as me,” she flipped her dark hair over her shoulder, then glanced down at her dress and adjusted the thin shoulder straps. “Girl, you’re a Jenkins. A proud, educated black woman who can do anything you set your mind to do. You might as well face it. Every since you broke up with cutie-pie Craig Logan, you have been scraping the bottom of the barrel for male companionship. Your drunk boyfriend is proof. You can continue to be in denial if you want, but until you get yourself together, we’re going to keep talking about you.”

“What?” Toni turned slightly, still gripping the edge of the tub. “What are you talking about? I’m not in denial about anything. I have not—”

All talk ceased. Toni was almost afraid to look back to see who had cleared their throat. There were two people she didn’t want to see when she turned around – her grandfather or her pain-in-the butt cousin, MJ. Either one of them would make her feel worse than she already did about bringing Ronald to the party. I knew I should have closed that damn door.

Blowing out a frustrated breath she slowly turned her head toward the door and the steady thump of her heart went haywire. Heat soared to every cell in her body when her gaze met clear, hazel eyes that twinkled with mirth and belonged to the tall, gorgeous specimen whose broad shoulders were almost as wide as the bathroom doorway. Craig.

“Please tell me that guy isn’t dead and that I don’t have to arrest you two for murder.”

“Well, well, well, if it isn’t Cincinnati’s finest and I mean that in every sense of the word.” Jada stood and ran a manicured hand down the front of her black slip dress, smoothing out the wrinkles. She glanced at the wide mirror over the sink and turned her head back and forth before shaking her hair wildly. Craig almost laughed when she rubbed her lips together, smiled at her reflection, and struck a pose before turning to him. “Glad to see you, Officer Logan. I trust you can take it from here,” she said on her way out of the oversized bathroom.

With an amused grin, Craig shook his head and watched her stroll down the hall as if she didn’t have a care in the world. He got along well with all of Toni’s family, but Jada, known for her oversized ego and theatrics, always cracked him up. He turned back to Toni and the smile slipped from his lips as she scurried to her feet, dusted off her knees and adjusted her drool-worthy red dress. A ripple of desire surged through his body and catapulted straight to his groin the moment their gazes collided. He’d worked a twelve-hour shift and was dog-tired when he first pulled up to the Jenkins’ estate, but exhaustion no longer plagued him. Instead, his need to pull Toni into his arms and hold her close took root. Despite what he told himself when deciding on whether to attend her grandfather’s birthday celebration, there was no way he’d be able to walk away from her tonight – at least not without tasting her tempting lips.

His heart pounded loudly in his ears as his gaze traveled from her perfectly made up face down her curvaceous body and shapely legs until his perusal stopped at her red strappy shoes. The eight months of them being apart suddenly felt like eight years as he slowly took her all in, realizing just how much he had missed her. God she’s beautiful. So many days had come and gone when he wanted to call her, or just see her for a minute, but he’d kept his word. When she walked away from their relationship, she made him promise not to seek her out, telling him that she needed space. After seeing her tonight, all bets were off. No way could he be in her presence and not want what they once had.

“What are you doing here?” she asked, her sexy voice but a whisper.

When he didn’t speak right away, she nervously pushed a lock of her long, thick hair behind her ear and peeked at the big brute lying at her feet. Glancing down at him, Craig wondered what she was thinking. Was she seriously dating this guy?

He leaned against the doorjamb and tucked his hands into his pants pockets. Eyes as warm as fresh-baked chocolate chip cookies on a cold winter’s day stared back at him, and he shifted his stance to hide the evidence of his sudden arousal. He wasn’t surprised by the ardent effect she still had on him, but right now wasn’t the best time to indulge in what his body craved from her.

She glanced away. Her gaze bounced from him to the jerk on the floor and then back to him again. Why was she nervous? Toni was one of the most confident women he’d ever met, and right now her behavior didn’t fit her usual self-assured personality. If anything, watching her actions now reminded him of a time, early in their relationship, when she was slow to let down her guard and unwilling to share her desires, needs, and even her fears.

Bestselling author, Sharon C. Cooper, lives in Atlanta with her husband and enjoys reading, writing, and rainy days. She writes sweet and contemporary romance, as well as romantic suspense. Sharon is a member of Romance Writers of America (RWA), member of Georgia Romance Writers (GRW), and a member of the Page a Day Writers Group. To read more about Sharon and her novels, visit www.sharoncooper.net